South Korean firms to stay in Iran despite US sanctions: Envoy 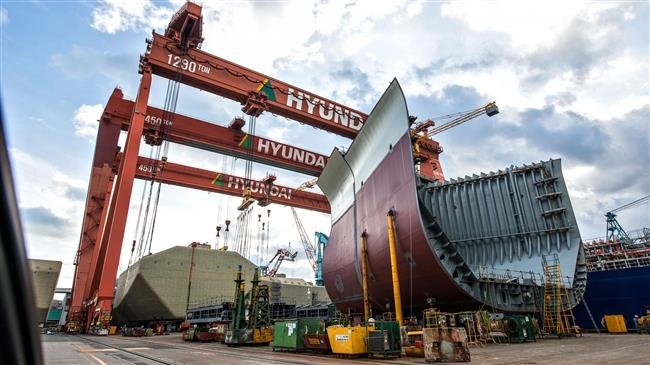 South Korean Ambassador to Tehran Ryu Jeong-hyun says companies in his country understand the significance of the Iranian market and will not leave it under the US sanctions.

The Korean diplomat made the remarks in a Wednesday meeting with Bahman Abdollahi, the head of the Iran Chamber of Cooperatives, in Tehran.

“Many European companies are leaving Iran, but [South] Korean firms have declared they will stay in Iran,” he said, adding that Korean companies understand how important it is to be present in the Iranian market.

“Our ties are currently influenced by the US sanctions…, but the fact that cooperatives are exempted from these bans gives South Korea a very good opportunity,” the Korean diplomat said.

He also hailed the strategic and significant position of Iran in the region, and underlined that relations between Tehran and Seoul are far beyond bilateral trade.

The Iranian official, in turn, said the Islamic Republic expects South Korea as one of its key business partners to continue its operation in Iran in the situation created by the US sanctions.

Abdollahi said the US bans would not include the cooperatives sector as it is not dependent on the government, and this gives Seoul a great chance to increase its interactions with Iran at a time when European firms are leaving the country.

Given the good history of South Korean firms’ presence in Iran, they can use the opportunity created after the withdrawal of European companies from the Iranian market, and expand their relations with the Islamic Republic, he noted.

Ryu's comments come as several Korean companies have almost suspended selling their products and doing their services in Iran based on contracts they had signed with Iranian firms and organizations after the implementation of the 2015 nuclear deal between Tehran and world powers.

Hyundai Motors has reportedly ended its cooperation with the Iranian company Kerman Khodro in the Special Economic Zone, Arg-e Jadid after the US president announced it will re-impose sanctions on Iran.

Hyundai Heavy Industries Co., the world's largest shipbuilding company, has almost completed the building of 10 vessels for the Islamic Republic of Iran Shipping Lines (IRISL) company based on a 2016 deal, but the ships are still sitting in the Korean company's main yard in Ulsan over the US bans.

Seoul has fully complied with the US sanctions in the past few months, and totally stopped its oil imports from Iran in September for the first time in six years.

The country made the decision to cut its oil imports long before US sanctions against Iran take effect in November 4.

South Korean buyers, which are among major Asian buyers of Iran’s crude oil, suspended Iranian oil loading from July due to the uncertainty of getting a waiver from the US government.

The country announced in August it was in talks with the US government to receive exemptions on Washington’s sanctions on oil imports from Iran, which is Seoul's third crude supplier.

South Korea says it is in talks with the US government to receive exemptions on Washington’s upcoming sanctions on oil imports from Iran -- Seoul's third crude supplier.

US President Donald Trump in May pulled his country out of the 2015 Iran nuclear deal and announced he would re-impose the anti-Tehran sanctions, which it had lifted under the agreement, in two phases.

The first round of sanctions, which mainly targets Iran's financial, automotive, aviation and metals sectors, was re-imposed in early August. The second round, which will hit the Iranian oil industry and banking relations, is slated for November 4.